A creative practice goes beyond the physical activity of making creative items, it includes the influences, ideas, research and materials, as well as tools and skills that were utilized in the creation of these items. Similarly, an abolitionist practice, working to eradicate the prison industrial complex (PIC), also includes a wide variety of elements that are consistently practiced to allow for a sustainable abolition to flourish.

Practicing Abolition, is a two part event series organized by gloria galvez that not only acknowledges the realm in which these two practices intersect, but furthermore aims to nurture and aid abolitionist creative practices. Within this series, we will explore various contributing elements like research, education, conversations, organizing, collaboration, ethics, boundaries and so on — that a person, especially one in the professional creative field, utilizes to continue both a practice of abolition and creativity without one compromising the other.

The second program Practicing Abolition: Knowledge = Skill Shares = Practices(date TBA) will consist of a trip beginning with a tour of Chuco’s Justice Center, now housed in the former David V Kenyon Juvenile Justice Courthouse in South Central and founded by the Youth Justice Coalition, a youth and family led organization working to challenge the hyper criminalization and punitive, unjust punishment of youth. And will subsequently traverse to the opposite end of LA County to Pitzer College for a tour of Ashley Hunt’s solo exhibition Degree of Visibility and two performative presentations on abolitionist art organized by artist and organizer gloria galvez and followed by a workshop she facilitates on the concept of art as abolition. 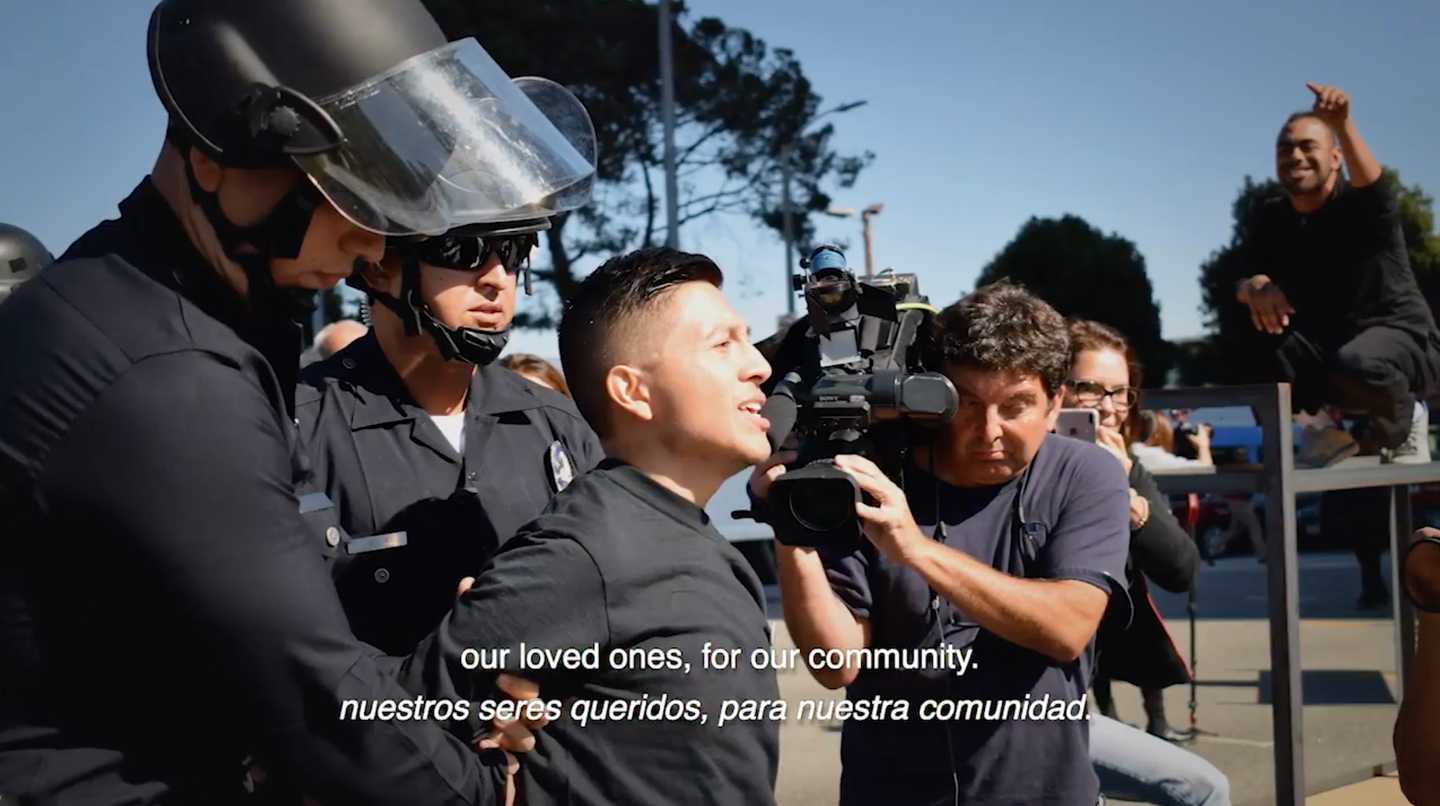 Roots Run Deeper Than Bars presents six works of art that critically bring attention to different points within the prison industrial complex (PIC) to either humanize those impacted by the PIC, and/or subvert this complex that impacts them, all while demanding the viewer’s acknowledgment of such points that are often only considered by those who are directly connected to the PIC either via impact or community organizing, which is the case for the participating artists.

gloria galvez maintains a practice of disrupting, subverting, and dismantling bland and oppressive status-quo norms and realities. Within this theme, her current focus is invoking alternate and simultaneous realities that prompt questions to the social-political conditions of all things – both living and nonliving things – both human and non-human things. And from this focus, the notion of a counterintuitive political solidarity and inter-identification with all living things (human & non-human) and non-living things (natural & non-natural) has risen in her work. She holds an MFA in Photo & Media with a concentration in Integrated Media from CalArts and a BA in Chicanx and Latinx Studies from CSULB. galvez has organized with Critical Resistance, Youth Justice Coalition, at land’s edge and currently with the Southern California Library. And her work has been exhibited at various Los Angeles art and community venues like the Los Angeles Municipal Art Gallery, East Seventh Punx, Human Resources, Art in the Park, Women’s Center For Creative Works, Delano Recreation Center, Mike Kelley’s Mobile Homestead and Chuco’s Justice Center. This Fall 2019 she is a Visiting Faculty artist in the Art Department at CalArts.https://gloria-galvez.com/

Ashley Hunt is interested in how images, objects, maps, writing and performance can engage social ideas and actions, including those of social movements, daily life, the exercise of political power, and the disciplinary boundaries that separate our art worlds from the larger worlds in which they sit. His work looks to structures that allow people to accumulate power, and those which keep others from getting it, while learning from the ways people come to know, contribute to or resist these structures. Rather than seeing art and activism as two exclusive spheres of practice, he approaches them as mutual and complimentary — drawing upon the ideas and aesthetics of social movements, cultural theory and art alike, the theorizing and practices of each informing the other. His current project, Degrees of Visibility, is a large body of landscape photographs from throughout the fifty U.S. states and territories, documenting spaces in which prisons sit from publicly available points of view — looking at how prisons are presented and camouflaged within our everyday perception, forming a part of an aesthetics of mass incarceration.

Set Hernandez Rongkilyo is an undocumented immigrant filmmaker and community organizer whose roots come from Bicol Philippines. Since 2010, Set has been organizing around migrant justice issues such as education equity for undocumented students, deportation defense, and community building with Pilipino migrants in Los Angeles. Set’s short films have been televised, featured, and awarded in film festivals across the U.S. Currently, Set is working on projects that explore the criminalization of immigrant communities as well as the connection between immigrant rights and disability rights. Set is the Impact Videos Producer at the California Immigrant Policy Center, and recently served as Assistant Editor and Impact Producer for PJ Raval’s documentary, Call Her Ganda (Tribeca, 2018). They are the recipient of the 2019 Annenberg Civic Media Fellowship, 2017 Soros Justice Fellowship, 2016 at land’s edge Fellowship, among others. Above all, Set is the fruit of their parents’ sacrifices, their siblings’ resilience, and their community’s nurturing.

Cole M James is an interdisciplinary artist with work that explores the intersections of digital production and the analog collecting of lived experiences. She received a MFA from Claremont Graduate University in Installation & Digital Media and a BA from Cal State San Bernardino in Painting. She was awarded the Alfred B. Friedman Grant, Walker Parker Artist Fellowship, Mignon Schweitzer Award and is the 2019-20 Carolyn Glasoe Bailey Foundation Artist in Residence. Her work has been exhibited in New York, Miami, Korea, and throughout Los Angeles.

Andrew Freire is an artist working in installation, sound, and painting. His work draws from documentary practices, accessing and participating within archive platforms and solidarity networks. Research within these disciplines and subsequent artwork, allows him to reconsider the logics of imperialism, its generational transmission, mythologies and discourse. His current projects are exploring dynamics between resource extraction, memory and jurisprudence. Freire earned a BA at the University of California, Los Angeles, in 2014. http://www.amfreire.com/

Veronique d’Entremont is an interdisciplinary artist invested in collaborative practice and community organizing. Her installations, videos and performances consider how we are shaped by the social and institutional spaces we inhabit and seeks methods to transform our relationship to these institutions— from academic, religious, medical & carceral institutions to our families of origin. In 2016, d’Entremont co-founded the Liberated Arts Collective with four formerly-incarcerated artists, Walter Wilson, Manuel Barrios, Dennis Durbin, and Paul Macias, and continues to cultivate spaces where, through art, individuals may heal from the impacts of institutionalization and incarceration. She owes her passion for this work to her collaborative partnerships and the experience of her mother’s institutionalization. Additionally, d’Entremont teaches Art Education courses at Cal State San Bernardino, and has been a visiting artist at UCLA, CalArts, California College of the Arts, Palomar College, Harvard-Westlake Middle School, and at California Rehabilitation Center, a prison in Norco, CA.

Camilo Cruz is a third-generation Chicano from Los Angeles. Beginning in 1998, he began self-identifying as a “bureaucracy artist.” This means that he combines the two seemingly disparate fields of visual art and public administration into one body of work. Camilo uses the actual participants of criminal justice (not actors) and real materials of the criminal justice system as his “paints” to depict the chaos, absurdity, evolution/devolution, and survival of humanity within the American bureaucracy of justice. Cruz has exhibited at the National Museum of Mexican Art, the El Paso Museum of Art, the Museo de Arte de Ciudad Juarez, San Diego Art Institute, Orange County Center for Contemporary Art, Harvard Law School, and Los Angeles County Men’s Central Jail, among other galleries, government spaces, and on-line publications. In 2012, he been was awarded the Artistic Innovation Grant from the Center for Cultural Innovation. Cruz is also a recipient of the California Community Foundation’s 2013 Visual Arts Fellowship. Camilo received his Master of Fine Arts (MFA) from Cal State University, Long Beach and a Master of Arts in Public Policy (MAPP) from Claremont Graduate University.

Ra Avis is the author of Sack Nasty: Prison Poetry (2016), Dinosaur-Hearted (2018), and Flowers and Stars (2018). She is a once-upon-a-time inmate, a reluctantly-optimistic widow, and a generational storyteller. Ra reads her poetry live at events throughout Southern California, and writes regularly at Rarasaur.com.

Jasmine Nyende is an interdisciplinary artist from South Central Los Angeles. Through fiber based textiles, music, performance and writing, she hold care as a time for the body to feel supported within community, in righteous rage in motion, in joy, in honoring of our journeys with ancestors and with each other. She returns our practices through weaving workshops in her studio and the music of her Black queer punk band FUCK U PAY US.

Micah Bournes is a poet and musician from Long Beach, California. He’s most known for his dynamic performance of spoken word poetry. He writes on themes of culture, justice, and faith. He is a co-editor of Fight Evil With Poetry Anthology and has traveled the world performing poetry and teaching creative writing workshops.

shabina toorawa values relationships between people and non-human life, the capacity of transformative justice, and seeks to abolish the prison industrial complex. through collaboration, practicing interventions and skilling up in first response. sometimes as an artist, organizer, and or facilitator of education, she hopes to maintain responsibility towards co-creating vibrant futures.

Elizeth “Ellie” Virrueta Ortiz, is an undocumented alumni of Cal State LA, where she recently received her Bachelor of Arts in Communication Studies and a Minor in Chicana/o Studies. She is also a youth organizer with the Youth Justice Coalition based out of South Central, and a previously a member of the San Gabriel Valley-Immigrant Youth Coalition. Both of which are dedicated to dismantling social injustice issues and implementing community based programs and resources. Her passion for fighting against Crimmigration and various social issues stems from her own personal experiences as an undocumented person, as well as experiencing her dad being deported multiple times, and experiencing the murder of her 14-year-old cousin at the hands of law enforcement.